The golf course offers magnificent vistas of Scotland’s borderland countryside, with the Mendick Hill dominating the sites southwest. Several premier golfers have taken strokes on this grass, among them the British Open and Masters champion Sandy Lyle, an honorary member. 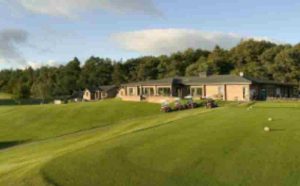 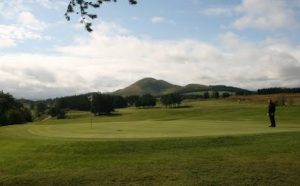 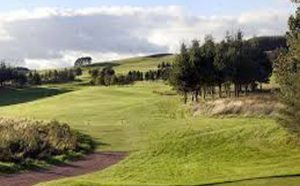 An outstanding 18-hole, par 69 moorland course which is a joy to play as well as offering a challenge to all levels of golfing ability.

Just a 20 minute drive down the A702 from the Edinburgh by-pass, it is situated above the picturesque conservation village of West Linton, away from the traffic.

Designed by James Braid, the course boasts wonderful views of the Scottish Border countryside with the hills of Upper Tweeddale to the south, Mendick Hill to the south west and the Pentland Hills to the north. In addition to the breath taking scenery there is an abundance of wildlife; including red grouse, hares, owls and curlews.

The club, formed in 1890, has always had equal membership for men and women and was recently voted the friendliest golf course in the Scottish Borders. The well appointed clubhouse caters for all pre and post round needs and overlooks the closing three holes of the course..

We played in October and the autumnal colours were impressive.

The course lay out, with dog legs and undulating fairways and greens challenges you throughout but no more than the 17th and 18th holes. A long par three, 189 yards followed by another, 222 yards uphill (par four for the ladies) with an elevated green and trees banked on the right, so beware the big fade or slice.

The clubhouse is welcoming and has a lovely atmosphere with beautiful views from its verandah. The food was delicious, in particular the red pepper soup.

50% Discounted Rate of £17.50 for Society Groups playing on Mondays and Thursdays.